Deforestation impacts the environment in many ways. Habitat loss, desertification, increased greenhouse gas emissions, and climate change are just some of the negative effects. In an effort to understand trends in deforestion, Blue Raster collaborated with the World Resources Institute and Esri to publish a study about using spatial statistics to identify Emerging Hot Spots of forest loss. We are excited to announce that this work is part of a new publication. 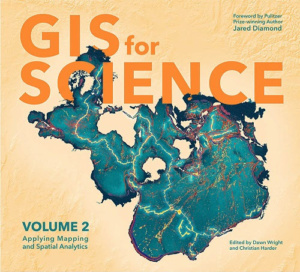 Featured in the new Esri Press book, GIS for Science, “Tracking Global Forest Loss” explores the study and the use of advanced geospatial tools to analyze and monitor forest loss throughout Brazil, Colombia, the Democratic Republic of the Congo, and Indonesia.

GIS for Science: Applying Mapping and Spatial Analytics, Volume 2 will officially be released in October 2020, but the pre-release volume is available digitally at this year’s Esri User Conference.

As the threat to our environment grows, scientists are working with cutting-edge GIS technology to help decision makers, technical experts and the broader public better understand trends in deforestation and improve future forest monitoring. With the ability to quantify deforestation loss over time, governments and other interest groups can create more effective policy over time.

On July 14th, 1960, a young Jane Goodall would arrive in Gombe, Tanzania to begin her study of wild chimpanzees. Six decades later, the same Dr. Goodall is a forerunner in the field of animal behavior, an innovator in community-led conservation, and a scientist whose work will continue to influence future generations of researchers.

DISCOVERY, INNOVATION & HOPE utilizes the sidecar feature within ArcGIS StoryMaps to demonstrate how the Jane Goodall Institute’s research area has expanded over the past 60 years. Viewers can travel from the Gombe Stream Game Reserve of 1960 to the over six million hectares of land the Institute now works with today by simply scrolling through the maps.

A reoccurring theme throughout the Story Map is Jane’s dedication to mentorship. The knowledge and impact of Gombe researchers extends across the globe with over 300 scientific articles produced at the Jane Goodall Institute. An interactive map of affiliated researchers allows readers of the Story Map to learn a little more about the people who continue to study animal behavior in Tanzania. 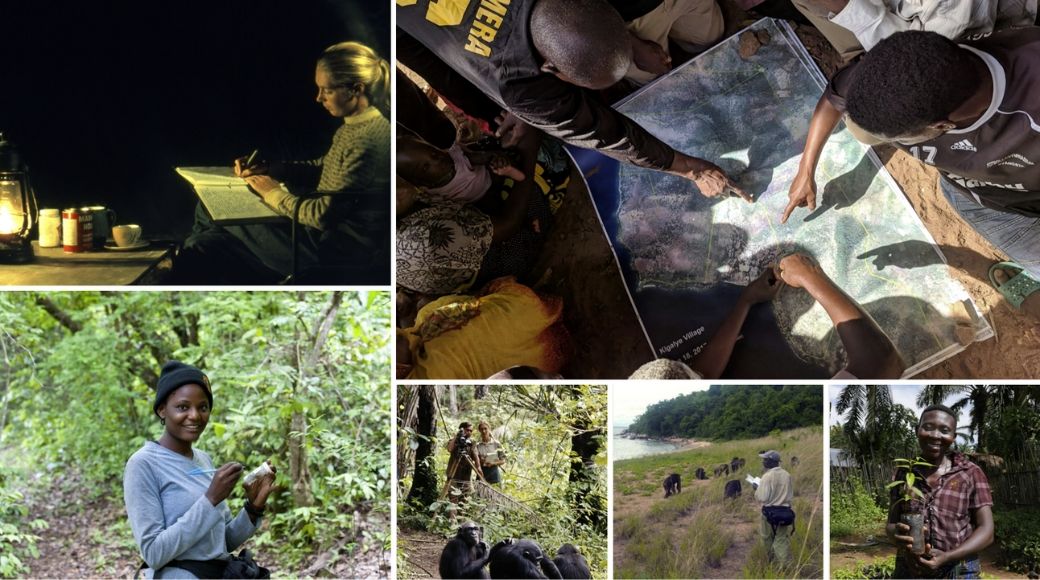 The importance of spatial analysis in conservation efforts is also highlighted. Gombe has three distinct communities of chimpanzees: Mitumba, Kasekela, and Kalande. Using long-term data, researchers were able to estimate range maps for the groups, which then informed decisions on habitat restoration. Web AppBuilder for ArcGIS brings these range maps to life by showing chimpanzee community movement from 1973 to 2016. Story map readers can interact with the app to learn about how deforestation and an increase in human settlements have affected each of the chimpanzee groups.

View the new story map here. For more information about our work with the Jane Goodall Institute, read our blog posts here.

Temperate grassland ecosystems, like the Great Plains of North America, are home to a wide variety of plants and animals and provide key ecosystem services, such as soil stabilization, carbon sequestration and water filtration. These lands are under increasing threat of loss due to the expansion of agriculture for food and fuel production and urban development. In the Great Plains, only half of all intact grassland remains, much of it on poor and marginal quality soils. Conversion of grassland to crops in areas of marginal soil is particularly hazardous to ecosystems due to the greater use of fertilizers required to make these lands productive and a higher risk of erosion.

To understand and address these issues faced in the Great Plains, Blue Raster is working with the World Wildlife Fund to bring the annual Plowprint Report online. Since 2016, the Plowprint Report analyzes grassland loss across the Great Plains. Published annually, the report provides a broad overview of trends within large study regions of particular conservation interest, such as the Missouri River Basin (MORB).

Since 2016, the Plowprint Report has published annual findings on grassland loss across the U.S. Great Plains.

“Being able to share the Plowprint Report as an interactive web map is an exciting opportunity to increase awareness about grassland loss across the Great Plains. The Great Plains covers such a large area that it is easy to become disconnected from the landscape beyond where one regularly interacts, and having maps like this with great visual displays at your finger tips allows us to easily see what is happening not just in your community, but across the county, state, region, and beyond.” – Patrick Lendrum, Science Lead at World Wildlife Fund

These areas are visualized in the new interactive Plowprint web map application. To quantify grassland loss, users can select state or county boundaries, draw, or upload their own areas-of-interest (AOI) for on-the-fly analysis. The tool generates a report with a collection of charts that help the user understand their AOI’s grassland characteristics and trends. 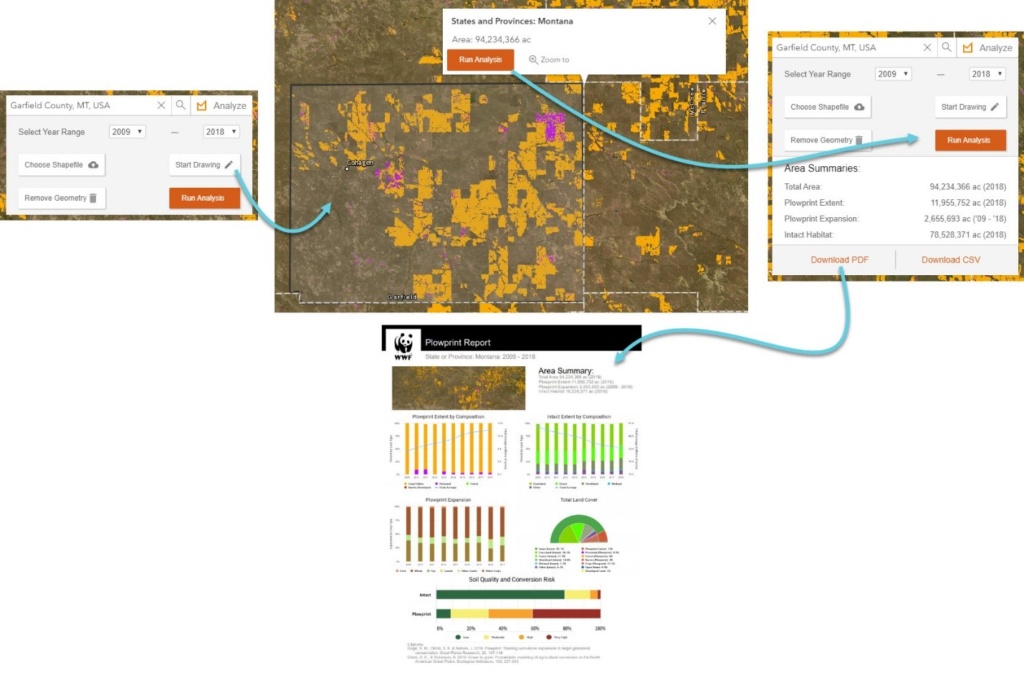 By leveraging the ArcGIS Image Server, the Plowprint app allows the user to run an on-the-fly analysis of grassland loss for their chosen area of interest (AOI). Outputs can be downloaded as a PDF or CSV. Above, the PDF document provides compelling visuals for understanding trends in the data.

The tool leverages ArcGIS Image Server to quickly analyze the user’s AOI to deliver a report of trends in land use conversion and composition. Users can select data going back to 2009, providing a detailed view of historical patterns. Once the analysis is run for the selected area, users have the option to download the results as a PDF document and CSV file.

With its ability to quantify grassland loss on-the-fly and generate powerful visuals along the way, this application will provide policy makers, companies, and landowners valuable decision making information about habitat conversion within areas under their control. With Great Plains comes great responsibility to monitor these vital ecosystems – Plowprint enables this action.

A Look at the Ohio River: Past, Present, and Future

Posted on November 14, 2019 by Christina Nordling

Image is courtesy of the NASA Earth Observatory, using Landsat data from the U.S. Geological Survey. The satellite image captured March 2018 flooding at the confluence of the Ohio and Wabash rivers.

Blue Raster partnered with The National Geographic Society, Lenfest Institute, and seven nonprofit newsrooms on a project entitled, Good River: Stories of the Ohio. The Ohio River runs 981 miles from Pittsburgh, Pennsylvania, to Cairo, Illinois, where it joins the Mississippi. It provides drinking water for five million people, and is also a thoroughfare of business, supporting jobs and communities. But it is also commonly cited as the most polluted river in the United States. For this project, PublicSource and six other participating newsrooms are producing a series of stories about the environment, economy and culture of the Ohio River watershed.

To give readers a sense of how big the Ohio River watershed is, Blue Raster created a series of map graphics for the site’s landing page. The maps touch-upon topics including population concentration and impaired waterways. To create the maps, our team used data from the U.S. Environmental Protection Agency (EPA) and leveraged ArcGIS Pro to style the map graphics.

In the series, journalists share the beauty of the Ohio River and threats facing the region. To take readers on an interactive tour of the Ohio River, Blue Raster produced a StoryMap called Highlights of the Ohio for the project launch. The StoryMap features points of interest along the river and the watershed region.

The Good River News Partners will be publishing multiple stories from November 2019 through January 2020. To follow along with the project and share stories or questions, text OHIO to 412-528-6575. Additionally, you can follow #OhioRiverStories on social media.

Good River: Stories of the Ohio is a series about the environment, economy, and culture of the Ohio River watershed, produced by seven nonprofit newsrooms. To see more, please visit ohiowatershed.org.

To learn more about StoryMaps, you can start here.

Thousands of fires are burning in the Amazon rainforest in Brazil - the most intense blazes for almost a decade. Global Forest Watch Fires (GFW Fires), an online platform for monitoring and responding to forest and land fires, provides a near real-time view into the current fire activity. Additionally, users can view fire reports and compare historical data on regions all over the world. 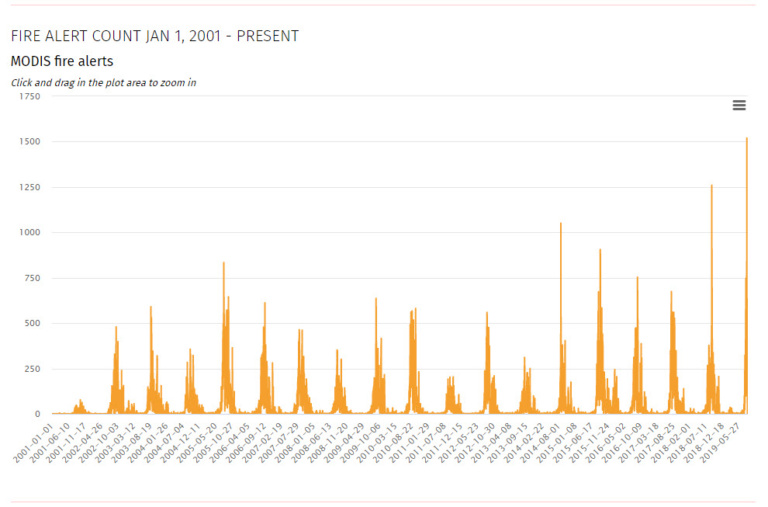 Blue Raster recently worked to add new features and capabilties to the Global Forest Watch Fires application. Want to see details for a specific area on the map? Draw or upload a shapefile to calculate fire counts and subscribe to alerts. Users can select specific areas and see the calculated numbers of VIIRS and MODIS Alerts in the past 24 hours. Next, users can click on the drawn or uploaded shapes on the map to subscribe to alerts for that area.

Global Forest Watch Fire Reports provide robust insight into fire history, cumulative fires to date, and a statistical analysis by administrative boundaries within a country or around the world. New to GFW Fires, users can now view charts of unusual fire activity. The report compares fires from the current week to the same week in the previous 16 years. In addition, new charts analyze fire activity in Palm Oil Concessions and Wood Fiber Areas. 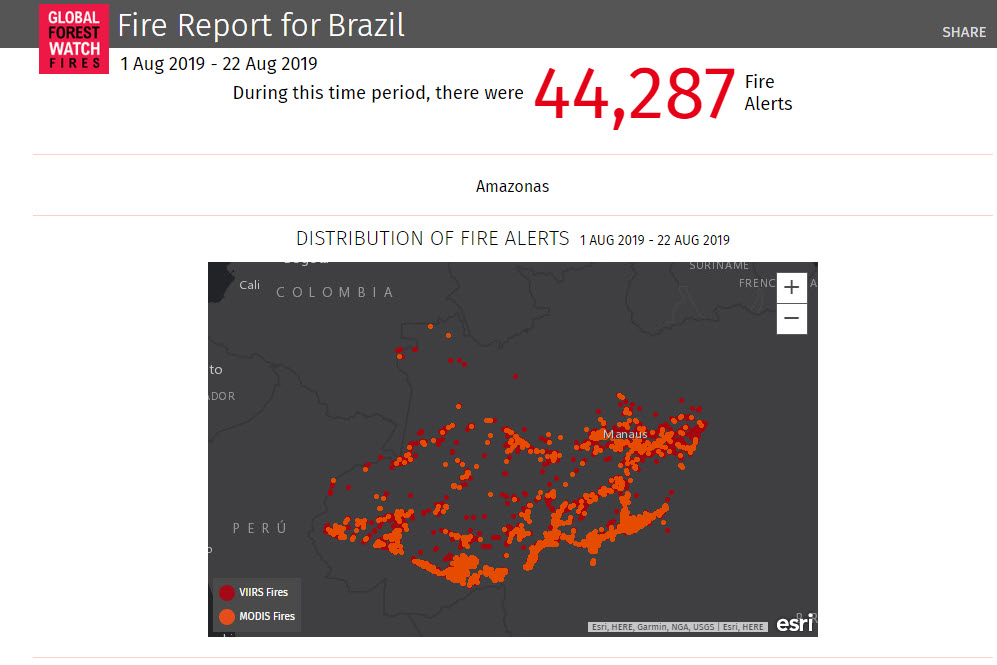 Fire alerts in the Amazonas region of Brazil.

In addition to the basemap imagery, Global Forest Watch Fires now provides an option for Sentinal Imagery. The latest satellite imagery is available from Sentinel-2 and Landsat 8. Sentinel-2, operated by the European Space Agency, has global coverage in 10-meter resolution, and can obtain updated imagery every 10 days. 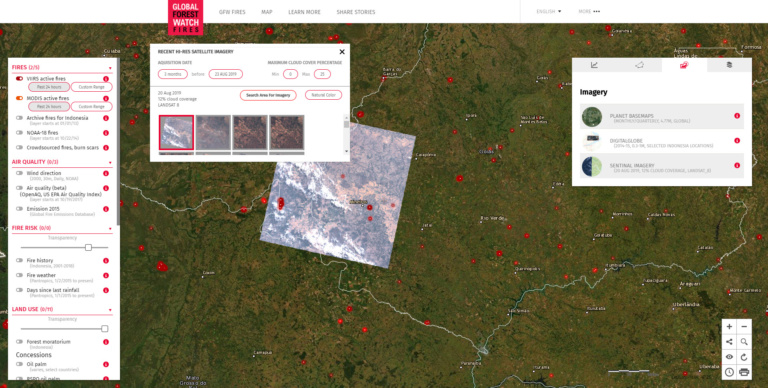 By using the latest geospatial technology, Global Forest Watch Fires allows anyone to access near real-time information about where and how forests are changing around the world. Users can monitor fire activity, sign up to receive alerts, or share their own stories on GFW's blog. Explore this interactive map today.