Take a Dip in The Texas Water Explorer

Blue Raster has long worked with The Nature Conservancy to tackle complex environmental problems using GIS analysis and expertise. The Texas Water Explorer does just that: transforming Texas water data into interactive, visual maps so that anyone can understand it at a glance.

The first step in creating the Texas Water Explorer was to create a dashboard, giving detailed background information to users learning about all of the water bodies and conservation indicators available. Read about each of the indicators and datasets, such as River Fragmentation or Sector Water Use, or explore each of the geographies across Texas from the Colorado River Basin to the Gulf Coast Aquifer.

Once in the explorer, users can view and compare data, for example, River Flow Alteration and Presence of Invasive Species. Indicators have pop-ups powered by Highcharts showing trends in data over time.  Export tools allow the creation of custom reports that can be downloaded as Excel and taken on the go. The Texas Water Explorer uses the ArcGIS JavaScript API and Knockout.js to deliver the large amount of data supplied by The Nature Conservancy.

The Nature Conservancy has called the Texas Water Explorer a “one-stop shop on the current state of water in Texas”, an essential component to informed decision making that will lead to healthy communities, healthy environments, and a thriving economy now and in the future. (TNC Launches Texas Water Explorer)

“By 2050, our population is set to double to 54 million and every region in Texas is in search of water to support its fast-growing communities. It’s essential to arm decision-makers with the best information available so they can make sound choices and be good stewards. This tool provides important data that can help Texans support healthy communities, a healthy environment and a thriving economy now and in the future.“

EPA’s Global Change Explorer provides data visualization across all aspects of environmental change and is now available to the public. Blue Raster worked with The Environmental Protection Agency (EPA) to redesign and improve their Watersheds mapping application, one of the three modeling projects which focuses on the largest 19 watersheds in the United States and how these watersheds are predicted to change under various climate change and urban development scenarios. 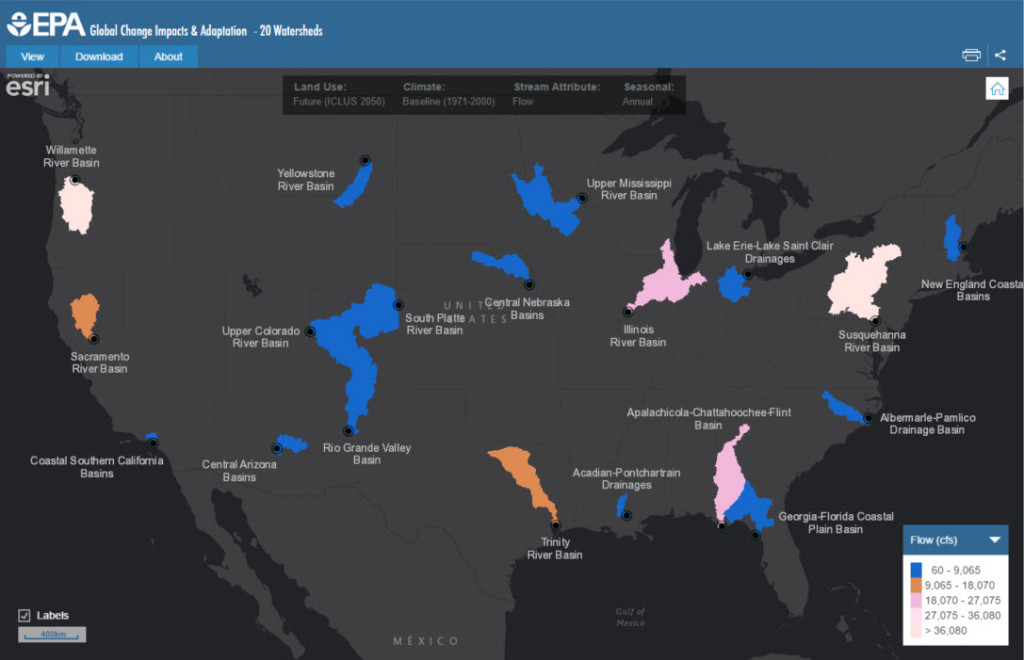 The application explores trends in sediment levels and nutrient loading, enabling viewers to visualize the sensitivity of watersheds nationwide. The sites selected represent a range of geographic, hydrologic, and climatic characteristics of the US.  While several water quality measures are included, the project has particular emphasis on stream flow, nitrogen, phosphorous, and sediment loads. 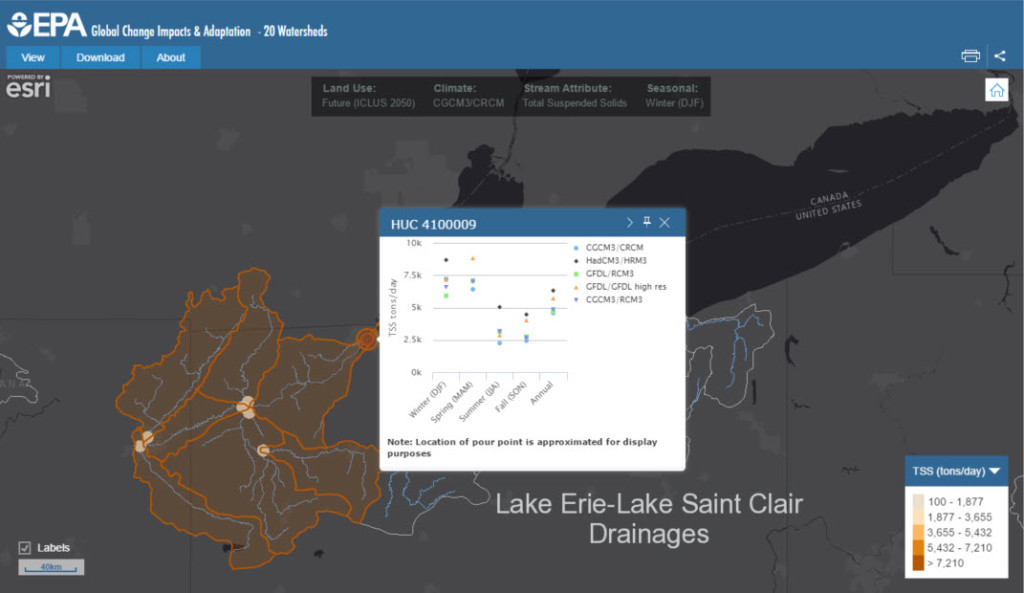 The site’s powerful data visualization is made possible by ArcGIS for Server, the ArcGIS API for JavaScript, and ArcGIS Desktop. To learn more about the project, visit the Watersheds Application and full report publication.

New Climate and Land Use Tools for EPA

Posted on February 1, 2016 by Christina Nordling 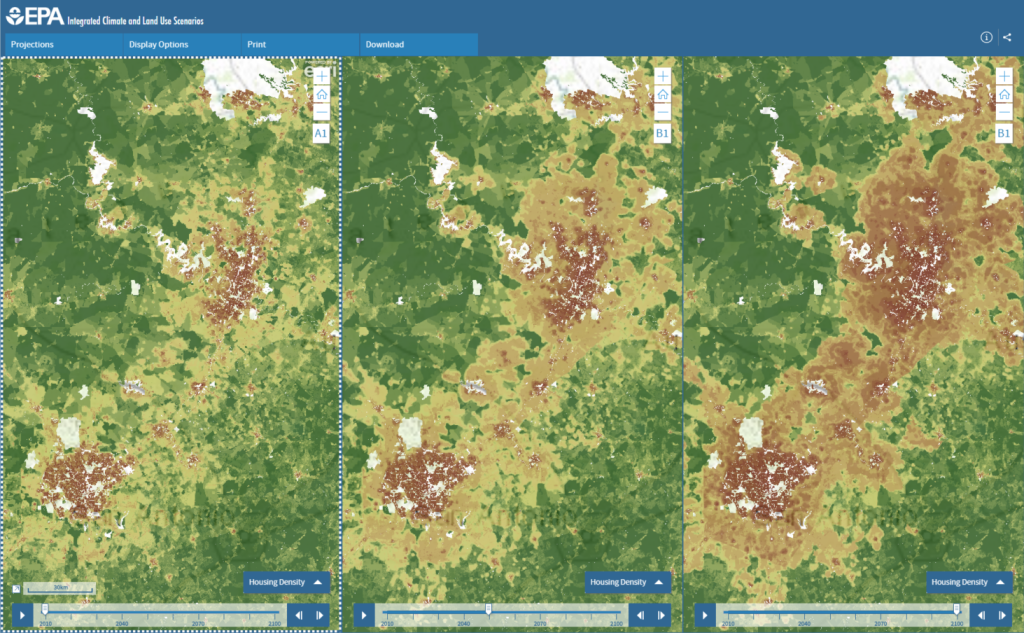 EPA intends to use the results of this first phase of modeling to facilitate investigation of additional impact scenarios including water and air quality. This research will enable more sophisticated model runs evaluating effects of projected climate change on population growth and economic development.

To let users compare and contrast maps, the application features a side-by-side comparison view. Users can easily view up to four maps in parallel, revealing similarities and differences in density and distribution. The maps can be synced to the same dataset, year, and/or location.

ArcGIS for Server 10.2 and the latest JavaScript API power the upgraded application. ICLUS leverages the powerful visualization components of D3.js and Highcharts. 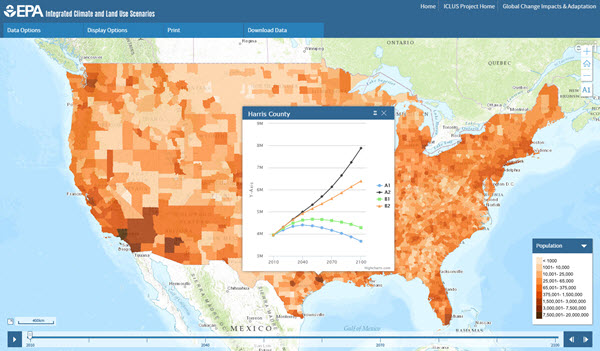 Unless We Act Now: UNICEF

Posted on December 1, 2015 by Megan Gottfried 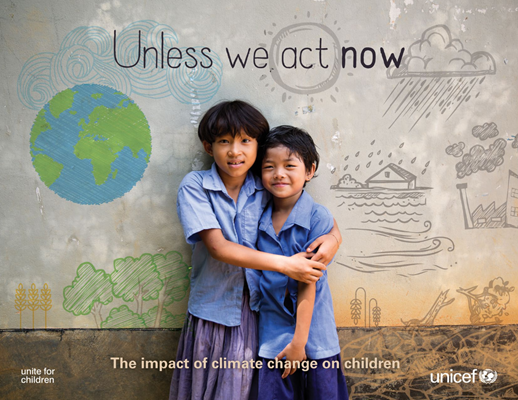 Blue Raster is proud to announce a collaboration with The United Nations Children’s Fund (UNICEF) to contribute to Unless We Act Now: The Impact of Climate Change on Children – a report published by UNICEF at the annual Conference of Parties (COP21), also known as the 2015 Paris Climate Conference. COP21 is a renowned conference that brings together international voices representing government and UN Agencies, NGOs and civil society to assess climate change and set universal agreements and goals for reducing climate change and adapting to the changes that have already begun.

The Unless We Act Now report leveraged geospatial analysis of current demographic, environmental and projected climate data, in order to direct aid to child populations across the world as they face unforgiving changing weather patterns.

UNICEF has made putting children first their mission, and although climate change is an imminent threat to populations across the world, it is children who are hit the hardest as their bodies are most vulnerable to change. Being able to understand where these 2.3 billion children are was the first step, but taking this further to understand how environmental conditions such as droughts, floods, and extreme heat effect food and water supply, sanitation, and the spread of disease is made possible through GIS analysis via ArcGIS Desktop and ArcGIS Online. 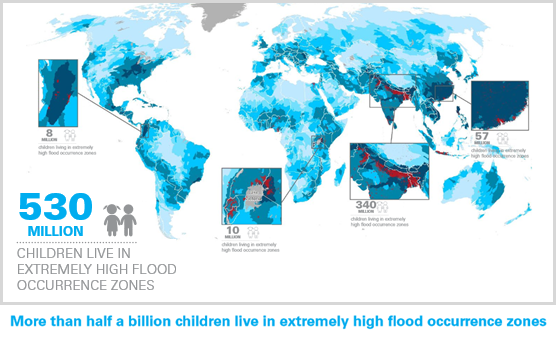 “COP21 is a fantastic opportunity for UNICEF to present our “Unless We Act Now: The Impacts of Climate Change on Children” report, as climate change will be of critical importance when protecting and preserving the future livelihood of children around the world. Blue Raster was with us every step of the way during the data analysis and cartographic development, and their timely responses, adaptive and analytical methods, and personal connections to spatial data subject matter experts working around the world helped make this project a resounding success.”

A map poster featuring the analytical and cartographic work was then featured at the 2016 Esri User Conference and won the ICA and IMIA Excellence in Cartography award, and was selected for publication in 2017 Esri Map Book, Volume 32.

“The Impact of Climate Change on Children by UNICEF was recognized by the judges for it’s powerful, stark design on a relevant, topical subject. This work delivered a high impact, strong message with clarity and effective simplicity.”