Posted on January 2, 2014 by Adrienne Allegretti

To help illustrate the extensive geographic reach of their mission and impact of their conservation programs, Blue Raster built the Where We Work web map for the National Fish and Wildlife Foundation (NFWF). The mapping application allows supporters to visualize where NFWF is working and learn more about individual grants of interest. Matt Foster, Monitoring and Biodiversity Officer at NFWF, has this to say about the map – “The interactive map showing NFWF projects over the past 30 years is a great asset.  It really helps to convey the breadth of NFWF work in the U.S. and around the world and describes the wide range of actions that we support.” 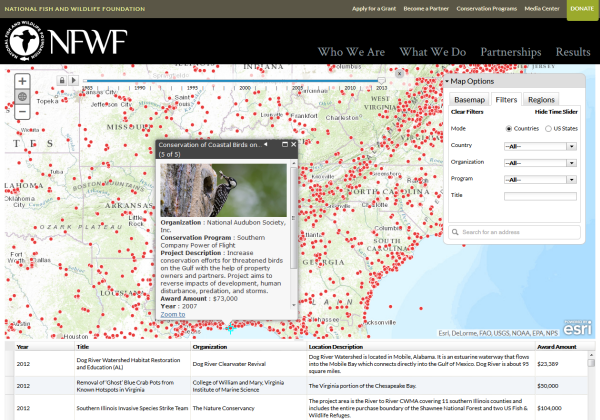 Built on ArcGIS for Server using the ArcGIS API for JavaScript, NFWF’s Where We Work map allows filtering based on time, location, and various other grant attributes including the associated conservation program. The Flickr API provides images for the various projects.

To see the map in action and explore the years of conservation work supported by NFWF, go to http://nfwf.org/whatwedo/map/Pages/map.aspx.

The National Fish and Wildlife Foundation (NFWF) is a Congressionally-chartered foundation, specifically charged with the administration of monies to “further the conservation and management of fish, wildlife, plants, and other natural resources” of the United States (National Fish and Wildlife Foundation Establishment Act, 16 U.S.C. §3701 et seq.). Since 1984, NFWF has become one of the world’s largest conservation grant-makers with more than 12,100 grants totaling over $2.1 billion.