The Esri Federal GIS Conference (FedGIS) is the largest gathering of GIS users in the government sector. With over 6,000 attendees from over 100 countries, this year it brought together geospatial users in government, non-governmental organizations, nonprofit, military, and related professions to discuss and explore the latest GIS innovations. Blue Raster hosted a virtual exhibit at FedGIS 2021 and attended technical workshops and sessions. We were excited to see some of our work featured in the Plenary session as well as our entry in the Map Gallery. 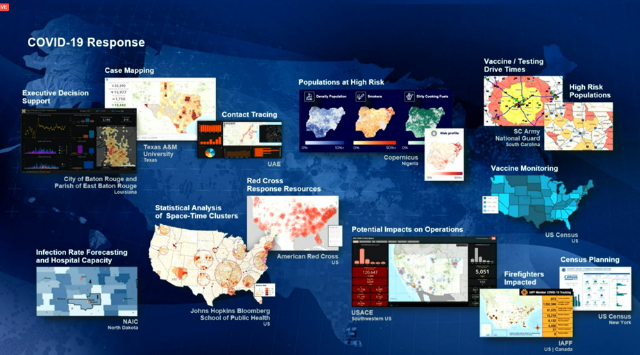 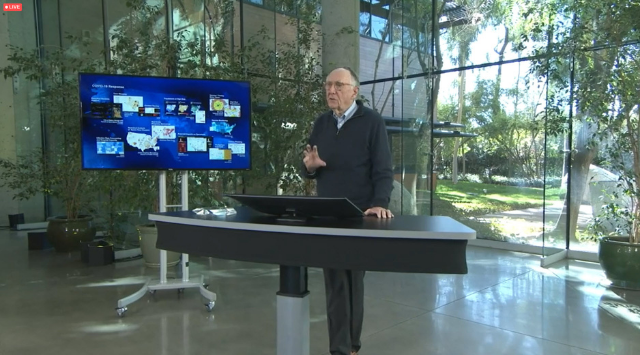 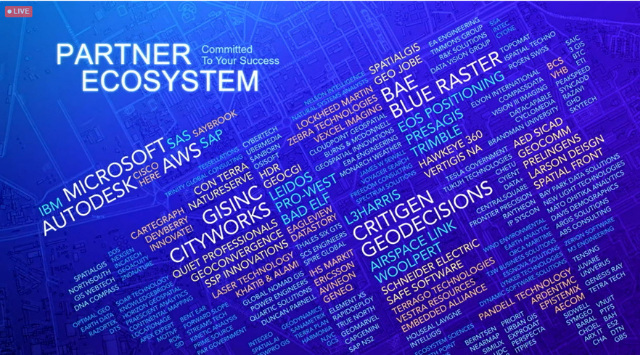 You can watch the Plenary Sessions and other recordings from FedGIS 2021 on the Esri Events YouTube Channel.

Hey Ya'll ! Due to the Pandemic, the annual North Carolina GIS Conference was held virtually this year, from Feb 16-19, instead of the usual location of Winston-Salem. Blue Raster Program Manager Phil Satlof attended sessions, staffed the virtual "booth" and presented on the topic of Configurable apps like ArcGIS Dashboards, Extendable and Custom-Configurable applications. 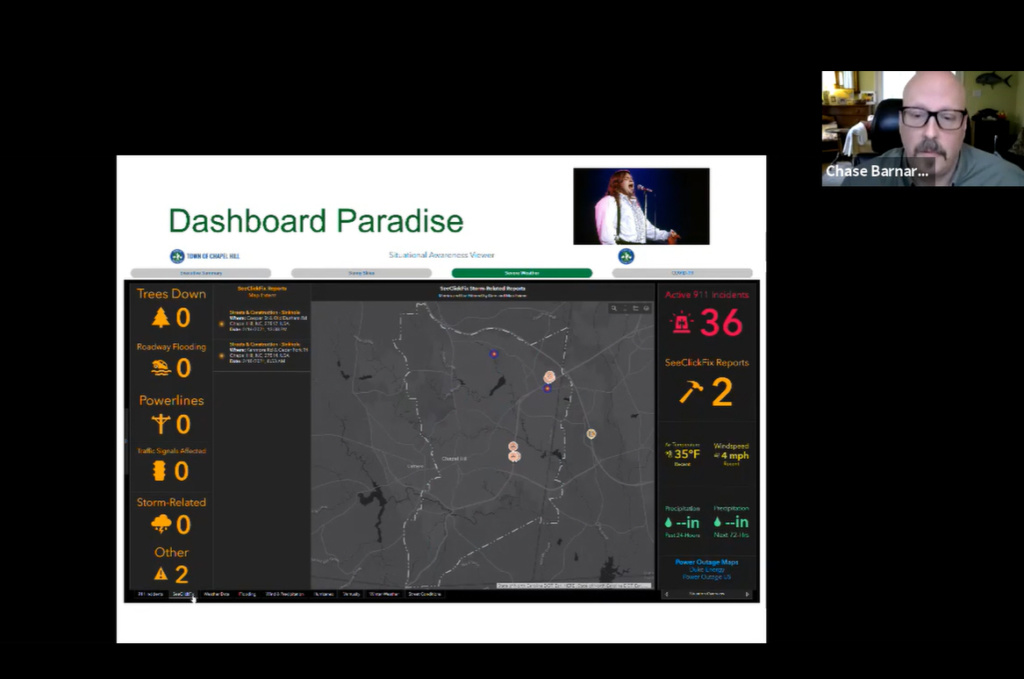 the conference for Blue Raster was when Chase Barnard and Dave Almond of the Town of Chapel Hill GIS Team presented "Paradise by the Operations Dashboard" which details the collaborative partnership forged between Blue Raster and the Town to refine ArcGIS Dashboards, Experience Builder Apps and create a custom workflow to pipe Computer Aided Dispatch data from the Orange County, NC 911 system into the Town ArcGIS Online account for use in a situational awareness dashboard.

Check back soon for more updates to this exciting workflow!

As communities around the United States seek to mitigate the impact of climate change by reducing their greenhouse gas (GHG) emissions, the importance of land use to the GHG balance has become more apparent. About one third of human caused GHG emissions each year are sequestered in forests and trees but most communities do not include forests and trees in their inventories. To help fill this gap, the World Resources Institute (WRI) and Local Governments for Sustainability (ICLEI) developed the Land Emissions and Removals Navigator (LEARN) tool. 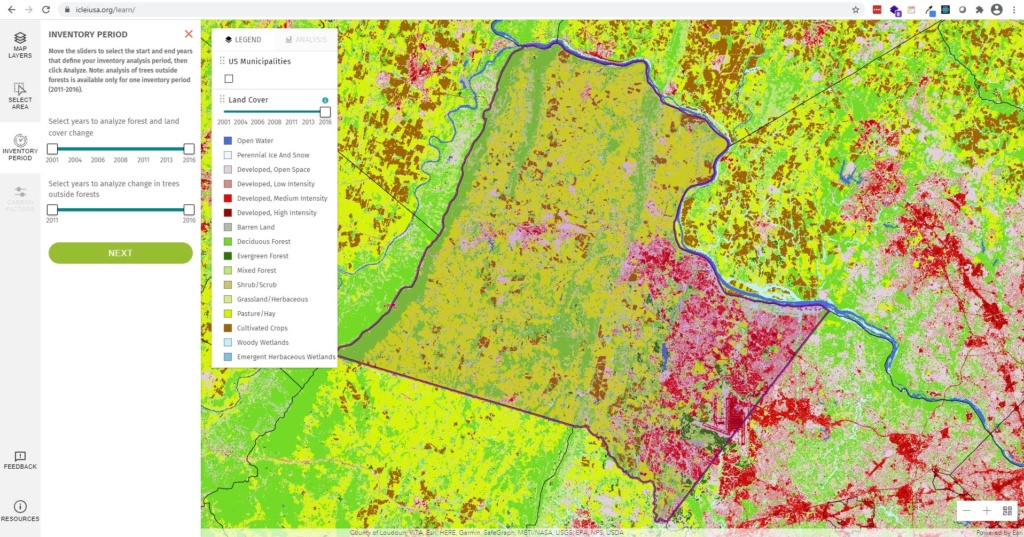 The LEARN tool provides an intuitive step-by-step workflow for communities to assess their net GHG balance based on land-use and land-cover changes. Once users have selected or uploaded their municipal boundaries and inventory period, the tool calculates land cover change using National Land Cover Database (NLCD) data. Users can then explore a change image to quickly see where areas are being converted to and from forests.

As the characteristics of the forests within the municipality impacts the amount of carbon emitted or removed, the change image is then compared to a carbon stock map developed from US Forest Service data based on the age and type of forest. NLCD tree canopy data is also used to identify addition or removal of trees-outside of forests to ensure a comprehensive assessment. Forest disturbance data for insects, fires, and other disturbances are also incorporated into the GHG balance. Finally, users can input the value of GHG removals from Harvested Wood Products (HWP) within the inventory period as HWP continue to sequester carbon.

Once the user has gone through the four simple steps to complete the audit, they are presented with an easy-to-understand table showing their community’s Net GHG Balance and the source of the emissions and removals. A PDF report and CSV data are also available to provide detailed analysis of the land-use and land-cover change with charts and graphs as well as the carbon factors for emissions and removals used.

The LEARN Tool was developed using the Esri JavaScript API and ArcGIS Image Server to provide the analysis.

From its headwaters on the Tibetan Plateau, the Mekong River runs through six countries, China, Myanmar, Laos, Thailand, and Cambodia before reaching the ocean. Over 60 million people live in the Mekong watershed and rely on its natural resources and fish and agricultural products produced here are shipped throughout the world. However, recent evidence indicates that the operation of new upstream dams constructed in China are changing the natural flow cycle of the river, affecting downstream communities. 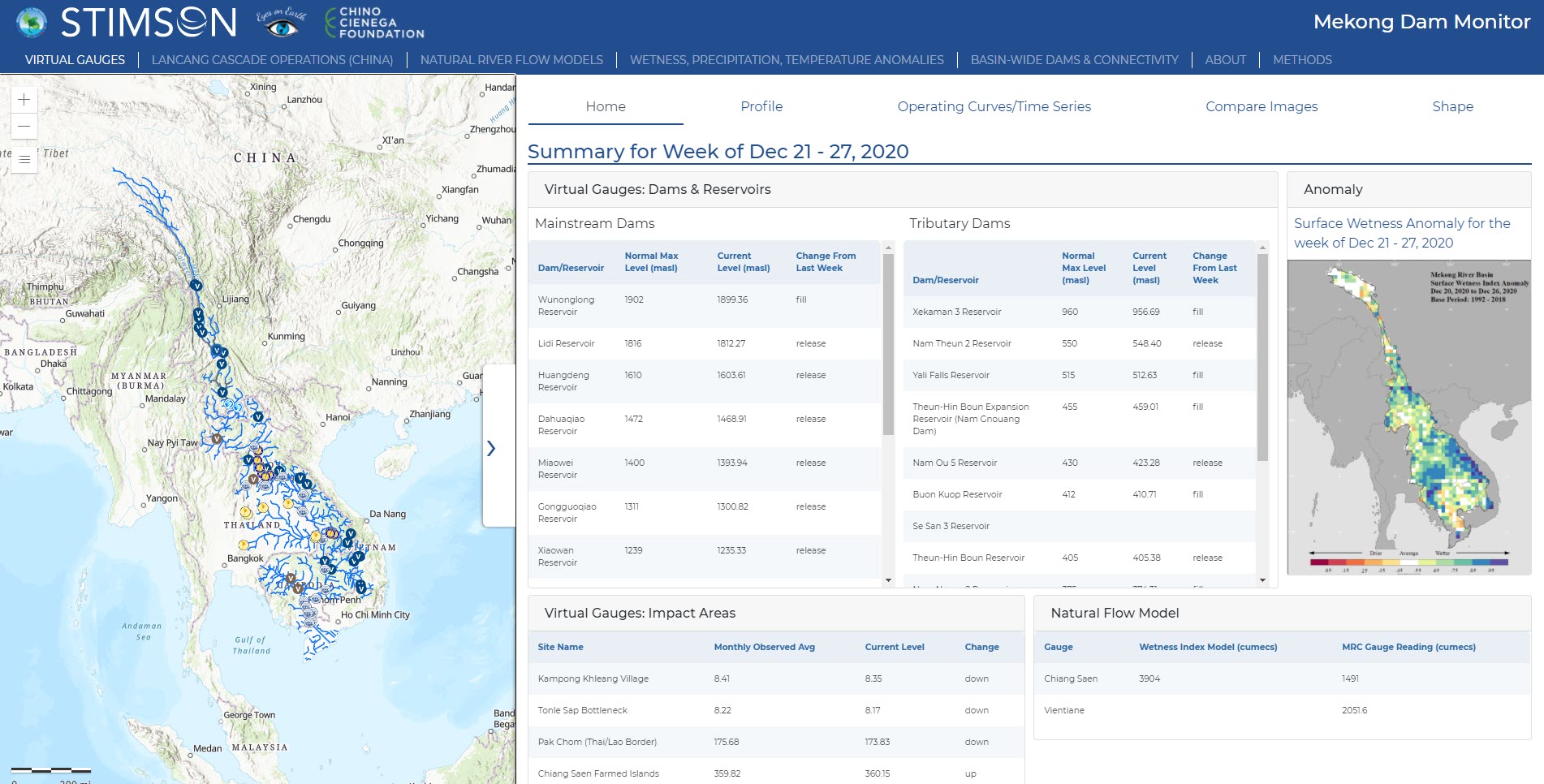 In spring 2020 a U.S. State Department-supported study by independent researchers at Eyes on Earth published a study showing that the upstream dams restricted enormous quantities of water in 2019, while downstream areas were experiencing an unprecedented drought. The newly launched Mekong Dam Monitor builds on that research to provide unprecedented transparency of the flow of water and conditions of dams and reservoirs along the Mekong River. The application was developed through a partnership between the Stimson Center’s Southeast Asia Program and Eyes on Earth, Inc with funding from the Mekong-US Partnership, and the Chino Cienega Foundation.

The Monitor includes multiple tools and indicators in a single platform, giving a comprehensive near-real time view of the current state of the Mekong basin along with historic conditions. Users can explore detailed information about dozens of dams and Impact Areas, including viewing satellite imagery, weekly reservoir level (meters above sea level), and inundated area, all estimated from remotely sensed data in the Virtual Gauges page. One tab over, the Lancang Cascade visualization shows the weekly state of water retention and power generation in each of China’s 11 upstream dam cascade. Just two dams in the cascade, Xiaowan and Nuozhadu can collectively hold nearly as much water as the Chesapeake Bay. 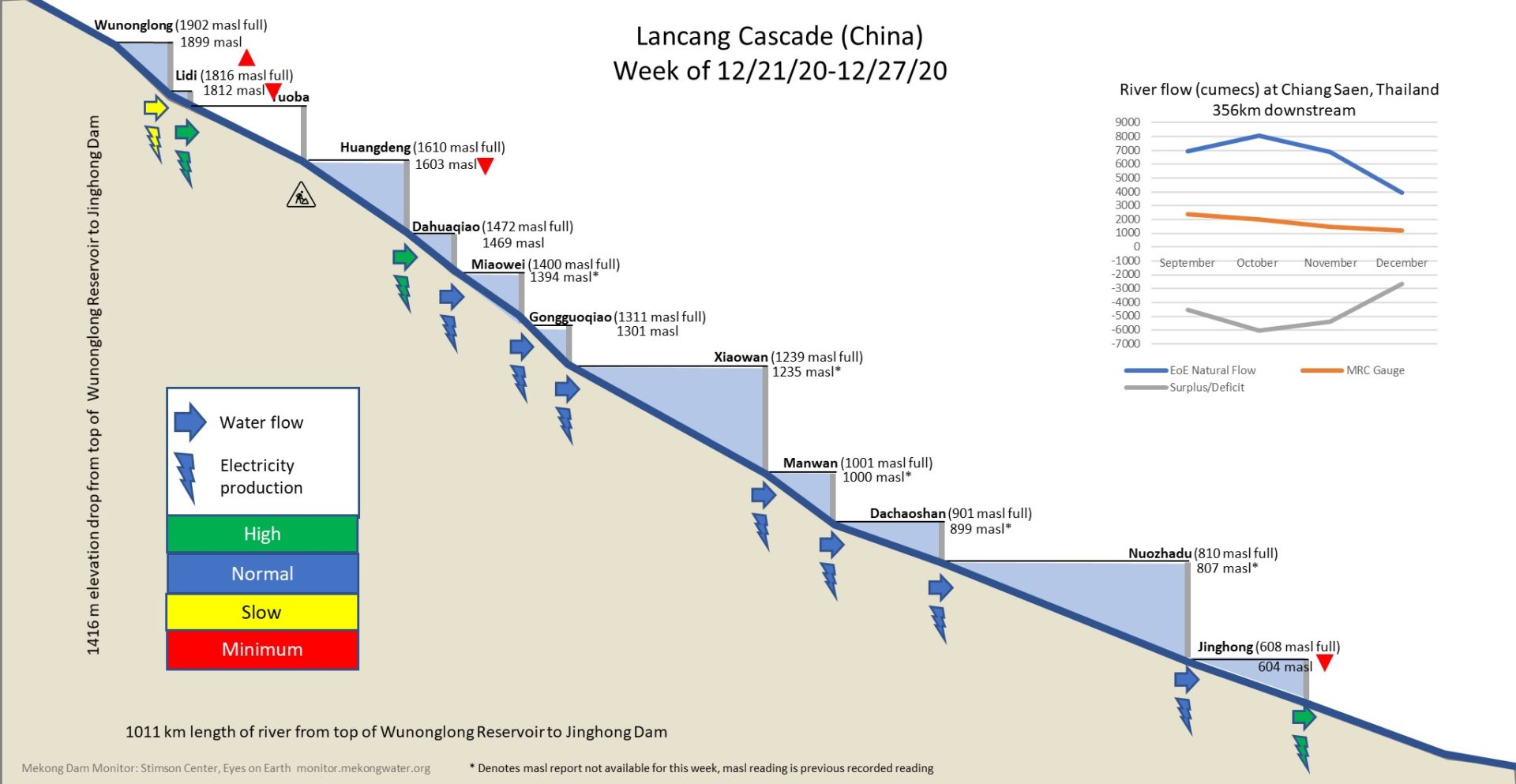 The Natural Flow Model visualizations leverage analysis by Eyes on Earth that predict the expected water in the Mekong River based on temperature and precipitation data derived from satellite imagery. These values are compared to actual flow rates measured at two locations by the Mekong Water Commission. The expected and measured flow rates diverge starting in 2012 with extreme differences in 2019 and 2020 when very little of the expected water from the rainy season passed the downstream gauges. 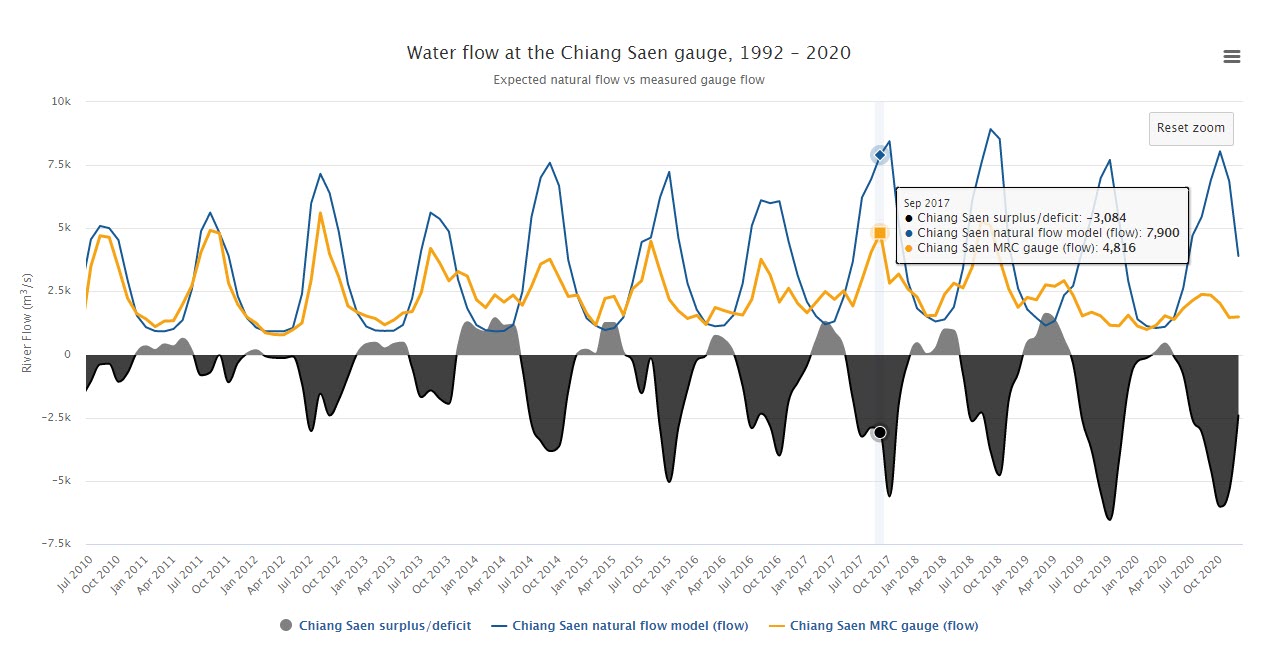 Additional data on climate anomalies, such as precipitation, snow cover, and temperature allow users to compare current and historic maps from 1992 to the present. Finally, the Basin Wide Dams and Connectivity page builds on the success of the Stimson Center’s Mekong Infrastructure Tracker Dashboard and provides comprehensive information about hydropower development in the region. This includes information about dam developers, financers, energy generation, and more.

Nearly all data shown in the Monitor is available for download for transparency. With this tool, stakeholders and policy makers will have a greater ability to anticipate environmental and social impacts of dam operations, adopt evidence-based policies for managing the Mekong River, and participate in transboundary river governance.

Posted on January 11, 2021 by Christopher Gabris

In 2012, the U.S. National Arboretum (USNA) launched its Arboretum Botanical Explorer (ABE), giving both first-time visitors and advanced researchers a unique opportunity to explore its massive collections from anywhere in the world. This explorer replaced the Arboretum’s legacy system with a web-mapping application powered by ArcGIS, allowing users to search the collections and get information on specific plant records.

To coincide with the retirement of Adobe Flash Player and to keep relevant in modern browsers for years to come, USNA took the opportunity to make enhancements to the app. The application was redeveloped in JavaScript from its original Apache Flex framework. Special considerations ensure that the new ABE retained all features present in its first iteration, while creating a fresh new design. Visitors and researchers will still be able to use the application to search plants by common and scientific name, see where mapped plants are located, turn on Collection and Garden areas, and view visitor amenities such as parking and restroom locations in preparation for their trip. Users may also choose to take a guided tour of the application to better understand all the capabilities offered.

Part of the ABE redesign increased emphasis on the Arboretum’s photo collections. Visitors to the site are now greeted with a photo gallery. Selecting a photo will zoom the map to the plant location and show a wealth of information about the origin.

Expanding the available search options was another goal of the ABE redesign. In addition to the photo gallery, users of the application have more advanced choices in how to explore the collections. Experienced researchers and enthusiasts alike may use the new Structured Search to query the database by collector name, garden/bed location, and even life cycle traits. Searching on multiple attributes of a plant or species helps users narrow down the large collection. For users just looking to explore, updated map symbology and the Browse Plants Search help to quickly find the results of all records in a species.

And of course, once visitors are onsite they can download the USNA Mobile App from the app stores and explore the specimens, active exhibits, and tours with ease.