Blue Raster announces the launch of Eyes on Syria for Amnesty International, the world’s largest human rights organization.  Created using ArcGIS Server Flex API, Flickr, and YouTube, this application tracks human rights concerns within Syria, the harassment of pro-reform Syrians abroad, and activism of Amnesty International supporters around the world.  Eyes on Syria offers a comprehensive picture of the situation in and outside Syria using geolocated photography and video evidence with eyewitness testimonies as well as activist campaign materials.  The project was led by Amnesty International’s Science for Human Rights Program. 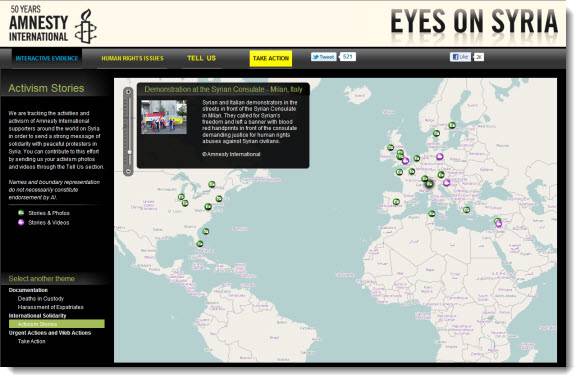 Blue Raster has developed Australia Walkabout Through Time for the Carnegie Institution for Science using ArcGIS Server and Flex API.  This interactive web mapping application allows the public to view interpreted data regarding the extinction and survival of megafauna in Australia.  The website was developed towards middle and high school students to teach the science of paleontology in Australia and the use of geographic information systems as a research tool in helping to solve complex questions, such as What Happened to Australia’s Megafauna?  GIS enabled the scientists to see new patterns emerge.  For instance once their interpreted data was on a satellite photo of Australia, different climate and ecological zones were clearly visible on a continental scale.  For more information please visit http://www.australiamegafauna.org/.