Posted on June 7, 2013 by Adrienne Allegretti

Blue Raster is pleased to announce the completion of the second phase of eMammal, a collaboration between researchers at the Smithsonian Institution and North Carolina Museum of Natural Sciences.   The objective of eMammal is to document the effect of recreational use of conservation areas on animal populations.  To help in the effort, citizen scientists have joined forces with the researchers to deploy camera traps near and off trails of popular parks like Shenandoah National Park and Catoctin Mountain Park. They then retrieve and process the images collected using tools created by Blue Raster in the initial phase of the project.

The first season was a huge success with over 1 million photos collected, the species identified, and the images archived and awaiting review by the researchers. With the prospect of another 3 million photos on the way with the coming second season, Smithsonian asked Blue Raster to build an Expert Review Tool that would allow them to review the images and subsequent metadata from the first season.

Using Amazon EC2 Servers and S3 as the system infrastructure, the Expert Review Tool provides scientists with the means to see the collected photos and confirm or change the species identification and individual counts made by the volunteers. The tool allows researchers the ability to monitor the progression of their review process via a dashboard and ‘favorite’ images that can then be posted to the eMammal Facebook page and in return shared with the volunteers and others interested in the project. The tool also includes an interactive map, built on Esri ArcGIS API for JavaScript, which displays the camera trap latitude and longitude points that the volunteers collected using GPS devices.

By verifying the camera trap deployment images and data as well as locations, scientists for eMammal hope to document and map species ranges and population statistics.   With the success of the first Mid-Atlantic season, the collective team at the Smithsonian Institution, North Carolina Museum of Natural Sciences and Blue Raster looks to scale eMammal to be used in other regions across the US and worldwide. The images and data collected will help answer questions about mammal distribution and abundance, aiding the efforts of wildlife conservation.

Posted on January 11, 2013 by Adrienne Allegretti

eMammal is a project where citizen scientists work in collaboration with researchers at the Smithsonian Institution and North Carolina Museum of Natural Sciences to document mammals throughout the mid-Atlantic region, and soon, the entire country. Citizen volunteers place “camera traps”, infrared activated cameras, across the landscape in parks and other natural areas to collect photos of mammals. These photos help researchers answer questions about mammal distribution and abundance and use this information for conservation.

The first phase of this project was the Smithsonian Wild prototype funded through a grant which has evolved into eMammal.  To help manage the new camera trap data, Blue Raster and partner Orion Creative Group built a camera trap management and identification system.  Deployed on Drupal 7, the system manages volunteer and camera trap data for the research team. An Adobe AIR Desktop application allows citizen scientists to identify ‘captured’ animal photos and upload to the image repository in Amazon S3. Then the camera trap photos and metadata are collected by eMammal scientists and analyzed. 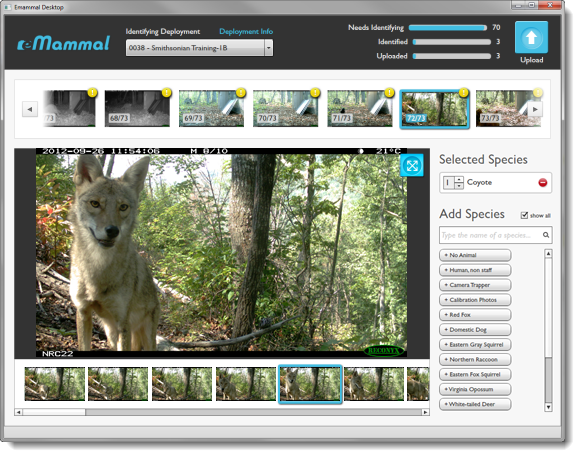 The next phase of eMammal will be the creation of a robust website where photos will be displayed along with project site information. Crowd sourcing for species identification will also be explored. Keep an eye out in 2013 for these great additions to the eMammal project. Visit http://facebook.com/eMammal to see a sampling of the best photos and keep up to date on our progress.