Posted on August 11, 2014 by Christina Nordling

On the heels of the White House’s commitment to open data, Blue Raster collaborated with ICF International under The Demographic and Health Surveys (DHS) Program to build the DHS Indicator Data Application Programming Interface (API). Funded by the United States Agency for International Development (USAID), the API provides users direct access to over 30 years of Demographic and Health Survey (DHS) data for more than 90 countries covering almost 1,500 indicators – more than 3 million records. By using this tool, developers, analysts, and researchers can obtain DHS data programmatically and develop applications that suit their needs.

The API was developed by Blue Raster on the ColdFusion Web Application platform. Developers can query the DHS data using both a RESTful interface, which allows selecting parameters including countries, indicators, and surveys, as well as a conventional query-based interface which provides advanced options for obtaining more customized results. For those looking to query large sets of data, the API offers additional parameters that control the format, citation, and version information. Additionally, JSON, XML, CSV and HTML output formats are supported to provide users with flexibility. 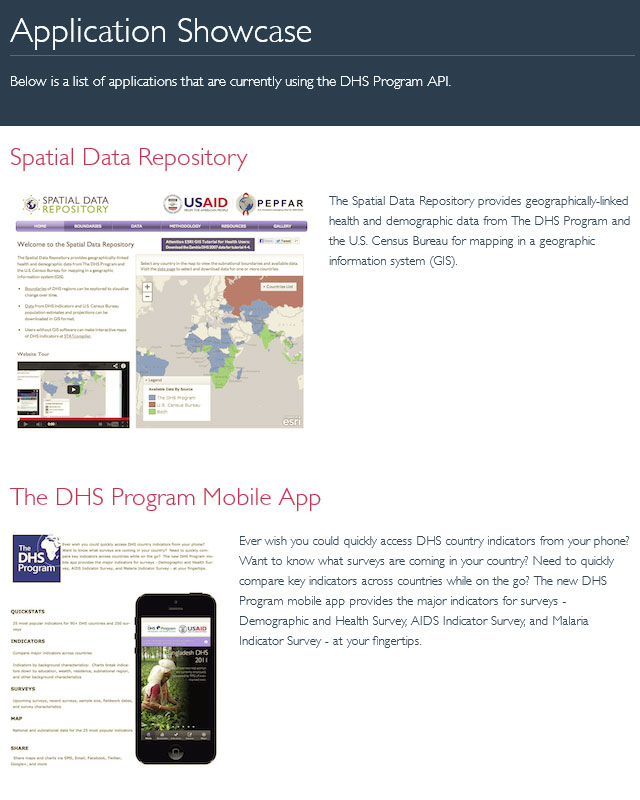 In the spirit of openness, the DHS Program has put together tips and code samples in JavaScript, ColdFusion, .NET, Python, R, Stata, and more to help users get started. You can even register to be a DHS API partner which allows you access to a larger number of entries returned per page and assistance in application development.

“The DHS API provides a new level of access to DHS data. Blue Raster has produced a wonderfully simple but powerful tool that will power both the DHS website and STATcompiler as well as users and developers own applications.”